The Revolution Within: State Institutions and Unarmed Resistance in Palestine 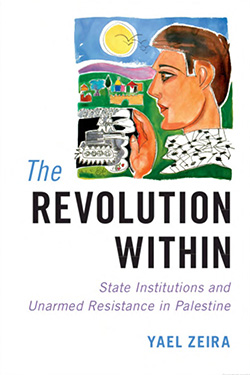 Why do some individuals participate in risky, anti-regime resistance whereas others abstain? "The Revolution Within" answers this question through an in-depth study of unarmed resistance against Israeli rule in the Palestinian Territories over more than a decade. Despite having strong anti-regime sentiment, Palestinians initially lacked the internal organizational strength often seen as necessary for protest.

This book provides a foundation for understanding participation and mobilization under these difficult conditions. It argues that, under these conditions, integration into state institutions - schools, prisons and courts - paradoxically makes individuals more likely to resist against the state. Diverse evidence drawn from field research - including the first, large-scale survey of participants and non-participants in Palestinian resistance, Arabic language interviews, and archival sources - supports the argument. The book's findings explain how anti-regime resistance can occur even without the strong civil society organizations often regarded as necessary for protest and, thus, suggest new avenues for supporting civil resistance movements.