Opting Out of Congress: Partisan Polarization and the Decline of Moderate Candidates 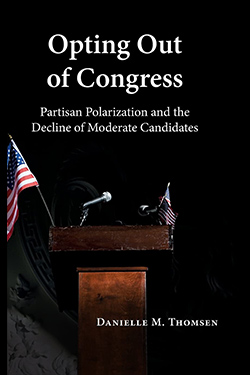 When journalists and pundits talk about the bitter partisanship in Congress today, they tend to point to three culprits: gerrymandering, the influence of big money, and primary systems that favor more ideologically pure candidates. But when scholars have tested these hypotheses, according to Maxwell political science professor Danielle Thomsen, they have come up short.

“The most obvious counterpoint for the gerrymandering hypothesis is the Senate,” she says. “There’s been no change in district boundaries because they are state borders, but we’ve seen rising polarization.” In the case of big money, Thomsen adds, studies have found that public financing of campaigns has not resulted in the election of more moderates. The same goes for primaries — for instance, open and closed primaries, which are expected to generate different types of primary voters, have produced very similar types of candidates.

So what else could be behind today’s hyperpartisanship? In her new book, Opting Out of Congress: Partisan Polarization and the Decline of Moderate Candidates (Cambridge University Press), Thomsen argues that a crucial factor has been overlooked: who chooses to run in the first place. “Moderates who could run for Congress aren’t doing so to the same degree as conservative Republicans and liberal Democrats,” she says. “And if the only people who are signing up to run come from the extremes, polarization is unlikely to diminish.”

Thomsen, a native of South Dakota, began the research behind the book as a doctoral student in government at Cornell University and a post-doctoral fellow at Duke University. Initially she focused on the partisan gap of women in Congress — to explore why the number of Republican women in Congress, most of whom were moderates, stagnated in the ’80s and ’90s while the cohort of women in the Democratic Party grew. But as she dug deeper, she found that the underlying issue of partisan polarization went beyond gender dynamics — the “hollowing out of the political center,” as she calls it in the book, applied equally to men and women in Congress.

Thomsen, who joined the Maxwell faculty in 2015, notes that Congress has not always been like this. Forty years ago, moderates accounted for more than half of the House and had significant power. “Today,” she says, “with the moderate faction being perhaps 20 people, it’s very difficult to band together and shape the direction of the party.”

The problem, Thomsen posits in the book, is not that moderates don’t exist; it is that even if they were elected to Congress, the benefits of the office would be too scant. Today’s moderates, she says, “have virtually no impact on policy, because the party leadership is setting the agenda and dictating the terms of debate. None of the top chair positions or the choice committee assignments are going to moderates. The moderates who are there are leaving, and they’re highly critical of the direction of their parties in Congress.”

All of which begs the question of what, if anything, can be done to create an environment where compromise — and progress — can be made. “If you want to elect people who are less extreme than current office holders, you need to have those people running,” says Thomsen. “How do you get those people to run? Perhaps just as you do with any group that has been historically underrepresented — women, people of color — you put extra resources into them. You recruit them. You give them institutional positions of power, such as a spot on Appropriations or Ways and Means. The party can incentivize certain behavior.” But the odds don’t look good for moderates right now.