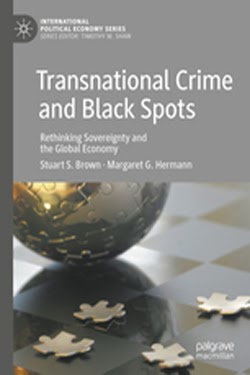 In their book, Transnational Crime and Black Spots: Rethinking Sovereignty and the Global Economy, published by Palgrave MacMillan, Maxwell School faculty members Stuart Brown and Margaret Hermann examine 80 safe havens across the globe from which transnational criminal, insurgent, and terrorist organizations operate — areas they term “black spots.” Like the black holes in astronomy that challenge Newtonian physics, and black markets that pose problems for the legal economy, these “black spots” challenge the Westphalian state system and our notions of sovereignty. These places are sustained by illicit activities and function outside state-based government control.

In the book, Brown and Hermann explore how black spots come to exist, their functions and the illicit activities for which they are known, and the transnational criminal, insurgent, and terrorist organizations that govern them. The authors trace the flows of insecurity between and among the black spots and provide a view of the illicit networks and key hubs that result. In doing so, they identify cross-border patterns not previously discussed within the literature. Given recent increases in internet-based transborder crime, the authors also explore whether similar sites can be identified in cyberspace. They conclude Transnational Crime and Black Spots by identifying and discussing some of the key challenges these safe havens pose for law enforcement and governance at both the national and international levels.

Brown is director of the master of arts in international relations degree program and vice chair of Public Administration and International Affairs. His teaching and research focus on international macroeconomics and political economy. He is the author of The Future of US Global Power: Delusions of Decline, also published by Palgrave MacMillan. Before coming to Syracuse, he worked at the International Monetary Fund, and as chief economist for Central and Eastern Europe, the Middle East, and Africa at BNP-Paribas and Bank of America.

Hermann is Gerald B. and Daphna Cramer Professor of Global Affairs and director of the Moynihan Institute of Global Affairs. She is the author or editor of 11 books and over 100 academic, technical, and policy papers. Her research focuses on the study of leadership and the management of conflict and crises. She has created leadership profiles of heads of state, insurgent and terrorist leaders, government executives, and those in charge of transnational nongovernmental organizations.

Transnational criminal, insurgent, and terrorist organizations seek places that they can govern and operate from with minimum interference from law enforcement. This book examines 80 such safe havens which function outside effective state-based government control and are sustained by illicit economic activities. Professors Stuart Brown and Margaret Hermann call these geographic locations "black spots" because, like black holes in astronomy that defy the laws of Newtonian physics, they defy the world as defined by the Westphalian state system.

The authors map flows of insecurity such as trafficking in drugs, weapons, and people, providing an unusually clear view of the hubs and networks that form as a result. As transnational crime is increasing on the internet, Brown and Hermann also explore if there are places in cyberspace which can be considered black spots. They conclude by elaborating the challenges that black spots pose for law enforcement and both national and international governance.

You can read more about their new book on the Palgrave MacMillan website.