Money in Politics: Self Enrichment, Campaign Spending, and Golden Parachutes 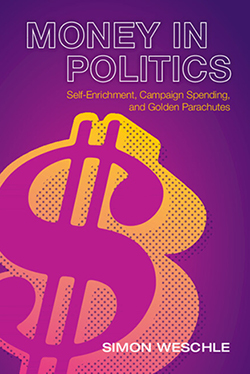 He maintains in the book that money in politics should be analyzed in a singular framework, widened to include how politicians enrich themselves while in office, spend campaign money to finance their re-election and accept lucrative jobs after leaving office. Putting these different forms of capital in one framework helps explain how money in politics impacts democracy, he asserts. Weschle explores cases of this internationally, using causally identified quantitative studies, qualitative cross-national comparisons and original survey experiments to follow the money in politics.

Weschle joined the Maxwell School in 2017. His research focuses on comparative political economy, democratic accountability and representation and quantitative methods. His work has been featured in scholarly publications such as the American Journal of Political Science, American Political Science Review and Journal of Politics. For his outstanding record of teaching, research and service, he was honored in April 2022 with the Daniel Patrick Moynihan Award for Teaching and Research.

Weschle received a Ph.D. from Duke University in 2015.

In politics, money is often the name of the game. Politicians enrich themselves while in office, spend campaign money to finance their re-election, and accept lucrative 'golden parachute' jobs after leaving office. Money in Politics argues that these different forms of capital are part of a common system and should be analyzed in a single framework.

The book advances a comparative theory that shows how self-enrichment, campaign spending, and golden parachute jobs are connected to each other. This theory explains when and how money enters politics, ultimately illuminating that a change in one form affects the other types and revealing the consequences this has for democracy.

The book uses a wide range of evidence from countries around the world, including causally identified quantitative studies, qualitative cross-national comparisons, and original survey experiments. Enlightening and instructive, this book shows that we can only fully comprehend the role of money in politics when we view it as a common system to be analyzed and critiqued.