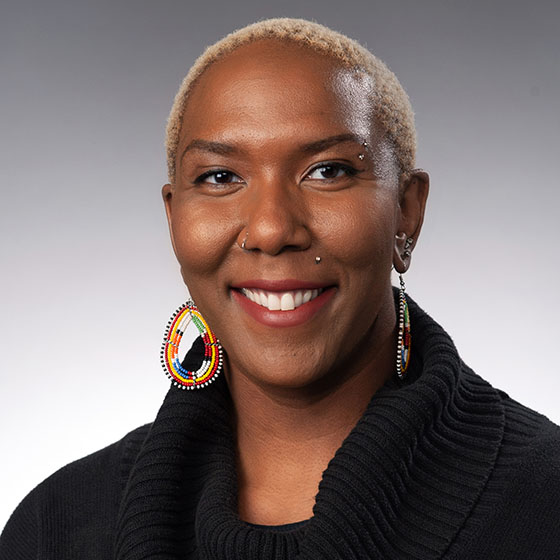 Jenn M. Jackson (she/they) is an assistant professor in the Department of Political Science. Jackson also holds faculty affiliations in African American Studies, Women’s and Gender Studies and LGBT Studies, and is a senior research associate at the Campbell Public Affairs Institute. Their research is in Black Politics with a focus on group threat, gender and sexuality, political behavior and social movements. Jackson is the author of peer-reviewed articles at Public Culture, Politics, Groups, and Identities, and the Journal of Women, Politics, and Policy, and is the author of several forthcoming book chapters on the intersections of race, gender, class and politics.

Jackson’s first academic book project investigates the role of threat in influencing Black Americans’ political behavior through the lens of policing in the United States. They find that Black women are most likely to express concerns about state-based and intragroup threat. Comparatively, Black men vary drastically in their responses to group threat depending on their sexual orientation, gender expression and vulnerability to stereotypes.

Jackson received a doctoral degree from the Department of Political Science at the University of Chicago where they also received a graduate certificate in Gender and Sexuality Studies. Jackson earned a B.S. in industrial engineering from the University of Southern California with a minor in sociology, and went on to earn an M.A. with honors in political science from California State University, Fullerton, where they later taught Political Science Research Methods and Black Politics.

Book Project: “Race, Risks, and Responses: Mapping Black Americans’ Reactions to Policing in the US”

In this project, Jackson is concerned with how racial socialization shapes daily perceptions of police/ing, how responses to the threat of policing vary uniquely by race, gender, class and embodiment, and how those perceptions affect the political behavior of young Black Americans. This work draws on critical race theory, political psychology and political behavior literature to foreground the ways that the threats associated with group membership uniquely shape the social and political lives and choices of young Black Americans.

Methodologically, Jackson utilizes quantitative analyses of survey data and experiments as well as qualitative analysis of in-depth interviews with young Black Americans ages 18 to 35 across cities like Chicago, New York City, Atlanta, D.C./Baltimore, Oakland, Los Angeles, Philadelphia and Boston to investigate both intergroup and intragroup differences in responses to threat.

Jackson, Jenn M. “Black Publics and Counterpublics: (Re) Situating the Queer and Feminist Work at the Margins of the Black Public Sphere.

Jackson, Jenn M. “Breaking Out of the Ivory Tower: (Re)Thinking Inclusion of Women and Scholars of Color in the Academy” in Me Too Political Science, (Routledge, 2020) (forthcoming)

Jackson, Jenn M. “They Wanna Be Saved”: Black and Queer Women as Saviors and Superheroes in Higher Learning” in Higher Learning and Social Inequality in the Early Twenty-First Century: Why A 1990s Movie Matters for America Today, (Palgrave Macmillan, 2020) (forthcoming).

Jackson, Jenn M. and Hilary Tackie [equal contribution]. “We Are How We Teach: Black Feminist Pedagogy as a Move Towards the Legibility and Liberation of All” in Critical Pedagogical Strategies to Transcend Hegemonic Masculinity (forthcoming).

Jackson Discusses Police Use of Tasers in Asbury Park Press

Jackson discusses masculinity for Black boys and men in The 19th