For Doctoral Student, Afghanistan Is an Elusive Home

Sohrob Aslamy grew up in a tight-knit Afghan community in Phoenix, Arizona, longing for a home he’d never visited.

“As much as I like to identify with Afghanistan, I have never lived there,” he says. “I feel in my heart of hearts a connection to the people, to the history.”

His interest was fueled by the vivid memories and fables shared by his Afghan father, who settled down in the states after attending Arizona State University.

Aslamy remembers one story about Alexander the Great. His father told him the conqueror-turned-king was so impressed by what is now Afghanistan that he ordered his ambassadors to bring sacks of its soil to Greece. He believed the smell of the rich soil would help him build support as he expanded his empire. 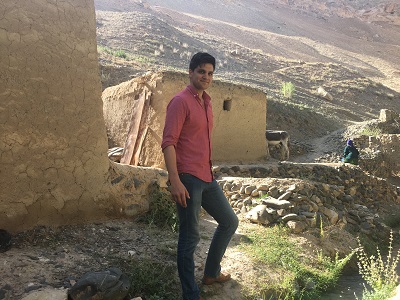 Now an academic pursuing his doctorate in geography from the Maxwell School, Aslamy appreciates the tale’s symbolism. “I always took from it that there is a real connection between the land and the people of Afghanistan,” he says. “It’s a very romantic idea. I have always just wanted to go to Afghanistan, to grab the earth and take one smell. There’s always been this deep, deep longing to know this home that I never knew.”

The yearning propelled Aslamy’s academic career. As an undergraduate at the University of Washington, he studied Near Eastern languages and civilization and interned with Sahar Education International, a nonprofi t that supports girls’ and women’s education in northern Afghanistan. He earned a master’s degree in geography at Maxwell in 2018 and is working toward a doctorate. His research has focused on urban development in Kabul, specifically on efforts by the government to construct a new capital city and urban center for the country—“Kabul New City.”

“In large part, this dissertation project is the outcome of my experiences growing up in an Afghan diaspora community in the U.S., within which I commonly heard stories about Kabul from those who once called it home,” he explains.

This past summer, Aslamy was to finally visit Afghanistan. Having advanced to the research stage of his dissertation project, he began making plans to meet relatives he had only seen in photographs and on social media.

The events of this past summer, however, sidelined the trip. “With the new Taliban government, I think much of this research project is up in the air, so not only are my plans physically to travel to Afghanistan stalled but so is my dissertation,” he says. “My inability to go there—it’s the least of all the tragedies that abound in Afghanistan.”

Aslamy spent this past summer and fall in Tajikistan, which borders Afghanistan for 843 miles. “I was always planning to base my research operations in Tajikistan because it is close by and more secure,” he says. “I also have many connections with various organizations and individuals in the country who have unique perspectives on developments in Afghanistan.

Moreover, as Afghans, especially former government workers, increasingly arrive and seek refuge in Tajikistan, I also have the opportunity to connect and speak with them there.”

While Aslamy considers how best to continue his research, he holds on to hope for the country he is yet to meet. “Afghanistan is not what it was 20 years ago, when the Taliban last ruled,” he says. “The people there have shown a desire and energy for creating a better Afghanistan, for creating a better society.  There is a lot to be hopeful for in that.”