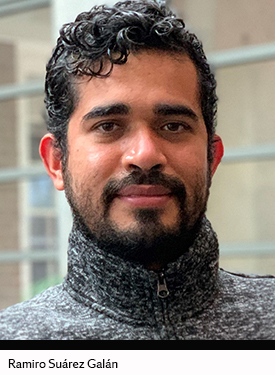 Ramiro Suárez Galán plans to spend the next six months pitching a plan for a financial oversight office in his home state of Oaxaca, Mexico.

"We don’t have checks and balances,” said Suárez Galán, a 2020 Humphrey fellow at the Maxwell School. “What the governor wants is done. Once [a project] is approved, the governor can allocate wherever he wants. He can modify as he likes.”

That means government decisions often do not favor Oaxaca, among the three poorest of Mexico’s 32 states. “There are a lot of decisions that are harming the financial situation of my home state,” Suárez Galán said. “We are spending more in salaries, materials, and there aren’t any congresswomen or congressmen watching that. We don’t have the tools to stop the desires of the governor.”

As part of the new Humphrey Impact Project, he developed a proposal modeled on the U.S. nonpartisan Congressional Budget Office (CBO) for Oaxaca’s legislative branch. He presented “Strengthening the Oversight of the Oaxaca State Congress in the State Budget Performance,” in late spring. He and other fellows presented their projects, which Executive Education created as a culminating project like its Executive Master of Public Administration and Executive Master of International Relations capstone course.

“We used the capstone as a model,” said Margaret Lane, Humphrey Fellowship Program director and Executive Education assistant director. “We provide a rigorous but simple process to create an individual action plan from a policy perspective.”

During their Humphrey year, fellows “can look at a burning issue from a different vantage point,” Lane said. “We wanted to give them some time to think about the problem: What is the issue? Why do we care about this problem? What are the root causes? How can we solve this problem and make some recommendations?”

Fellows incorporated what they learned in their coursework and their individual research. “A critical part of developing a credible recommendation is asking the fellows to analyze what implementation challenges they will face back home and describing a leadership approach to overcome those challenges,” said Executive Education Director Steve Lux, who served as faculty lead for the project. “It was a collaborative process where fellows gained key insights from each other. Analyzing the issue from a distance enabled these new perspectives.”

Fellows met biweekly with Lux and Lane to discuss the projects. “We got to sit around in a group and talk about the problems they were analyzing,” Lane said. “They go home with a tangible project they can present to key players and make a big difference. It allows them to know themselves as leaders and apply the Humphrey mission to lead change.”

Executive Education plans to offer the Humphrey Impact Project next year. “This has been a really positive experience and a good way of getting us together in a pandemic year,” Lane said.

The timing works out well for Suárez Galán as well. Mexico held elections June 6; newly elected legislators will take office in November. “This is the moment when I am going to start lobbying with new congressional representatives to present a draft for creation of an institution like the CBO in my state,” he said. “I will be working with media and social media to get this issue out to discuss the need for checks and balances.”