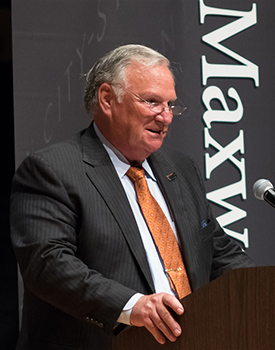 The idea that service can happen anywhere — across sectors, disciplines, and degrees, regardless of role or stature — is a familiar theme among Maxwell alumni, famously dedicated to the ideal of making the world a better place. Celebrants at the Maxwell School’s 2017 MPA Convocation ceremony honoring the 105 new graduates of the #1-ranked master of public administration program would hear this theme echoed many times throughout the June 30 event.

“When I first started to work in the government, I thought that ‘profit’ was a dirty word and had no intent or desire to work in the private sector,” said the Convocation keynote speaker, SU Trustee and veteran health insurance executive Howard (Howie) Phanstiel, to the newly minted fellow alumni. “Only later did I discover opportunities to make a difference in people’s lives through businesses that were highly regulated and/or were major government service partner providers.”

Reflecting on his early years in two state budget offices, Phanstiel said, “I was afforded incredible responsibility and accountability as a young professional to provide leadership in finding operational efficiencies, in establishing spending and revenue priorities, and in developing new policy.” He then advised graduates, “I recommend that you also consider jobs that are close to where the money decisions are made because in the social sector, policy and budget are inextricably intertwined. Budgeting was a great experience that helped me hone financial, communication, negotiation, and analytical skills, which served me well through my entire career.”

Phanstiel pointed to the need and the opportunity for public administrators to affect fiscal responsibility in the face of “dysfunctional obstruction” by both parties in Washington. “The last time Congress passed all its appropriation bills prior to the start of the fiscal year was in 1996. Congress has come to rely upon accounting legerdemain, continuing resolutions and other budget gimmicks such as sequestration to avoid making tough spending decisions for which they must be held accountable.” He urged graduates to hone their budgeting and finance capabilities. “With these skills, you will develop the language of collaboration and gain the confidence necessary to function as a co-equal to your private sector counterparts.”

In fact, Howie Phanstiel would leave the public sector and go on to have a long and impactful career in the private sector in the managed care industry, which culminated in his being named president and CEO, and later chairman, of PacifiCare Health Systems. During this time, he would be honored for his service by such diverse groups as the National Committee for Employer Support of the U.S. National Guard and Reserve, Seven Seals Award for Patriotic Employers, FORTUNE Magazine’s “50 Top Employers for Minorities,” the Orange County Black Chamber of Commerce, LatinaSTYLE’s “50 Best Companies for Latinas,” Hispanic magazine’s “Corporate 100/Best Places for Hispanics,” and Asian Enterprise magazine’s “Best Companies to Work for Asian Americans.

“Howie has a deep understanding of finance, health policy, and insurance, but, unlike many of his peers in these industries, Howie has a first-hand understanding of government and its power and potential for good — to address inequalities, and to strengthen individuals, their families, and communities,” said Maxwell Dean David M. Van Slyke in his introduction of Phanstiel. “He has led organizations with a focus on strong, respectful, and collegial cultures with a focus on corporate social responsibility. These commitments were shaped, in part, by Howie’s time at Maxwell and Syracuse University and his unwavering dedication to leaving what he’s found better than he found it.”

The Maxwell Alumni Award was given to Katherine Farrar MPA ’04, executive director of the Connecticut Women’s Education and Legal Fund, who led the auditorium in the recitation of the Athenian Oath.

The ceremony closed with remarks by graduating student Jace Beehler, who gave the Brady K. Howell Student Address, named in honor of the Maxwell alumnus who perished in the September 11 attack on the Pentagon.

“Our training here makes us critical of each other, but respectful at the same time,” Beeler said. “We are trained to be respectful of those who disagree with us, respectful of their opinions and beliefs. This unique training is not about the budgets and statistics and program evaluations that we will be able to complete when we become leaders, executives and managers… it is that we will be able to communicate in a world of diverse and conflicting beliefs and not on a superficial level, but communicate deeply and meaningfully. To argue and debate wholeheartedly, with all our passion and might, and still be able to work with those who disagree with us, hand in hand.”