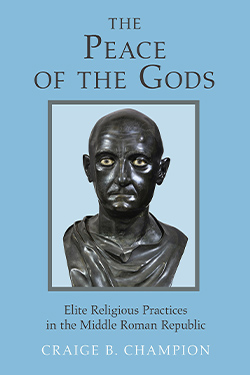 Craige B. Champion’s newest publication, "The Peace of the Gods: Elite Religious Practices in the Middle Roman Republic" (Princeton University Press), works to uncover how religion affected the actions of the elite class in the Roman World during the Middle Republic.

Though there has been much written about how Roman elites spoke of their religion, Champion works to explore the actions that elites actually took as political and military leaders to cultivate a more nuanced understanding of how elites used their beliefs to manage an empire.

As the ancient Greek historian Polybius observed of the Roman elites:

"Consequently, I believe that the ancients were not acting without purpose or care when they introduced ideas about the gods and beliefs about those in Hades before the masses, but rather that men today are much more careless and foolish to reject them.”

Contrasting past influential theory that viewed Roman elite’s relationship with religion as a way to control its subjects, Champion argues that Roman elites held sincere intentions of maintaining societal well-being by upholding the pax deorum, or "peace of the gods."

"The Peace of the Gods" seeks to incorporate a more complete understanding of the historical context in which Roman elites were situated, in an effort to demonstrate that the actions elites took cannot be separated from the time in which they ruled. Indeed, Champion notes, “...we have found elite instrumentalism as a primary mode of historical explanation to be inadequate.”

Champion’s approach to understanding the relationship the Roman elites had with religion allows the reader to envision Roman leaders as fully human, who used their beliefs as a guiding instrument to help manage the same fears, desires, and other emotions that leaders (and all people) still grapple with today.

"The Peace of the Gods" takes a new approach to the study of Roman elites’ religious practices and beliefs, using current theories in psychology, sociology, and anthropology, as well as cultural and literary studies. Craige Champion, professor of history, focuses on what the elites of the Middle Republic (ca. 250–ca. 100 BCE) actually did in the religious sphere, rather than what they merely said or wrote about it, in order to provide a more nuanced and satisfying historical reconstruction of what their religion may have meant to those who commanded the Roman world and its imperial subjects.

The book examines the nature and structure of the major priesthoods in Rome itself, Roman military commanders’ religious behaviors in dangerous field conditions, and the state religion’s acceptance or rejection of new cults and rituals in response to external events that benefited or threatened the Republic. According to a once-dominant but now-outmoded interpretation of Roman religion that goes back to the ancient Greek historian Polybius, the elites didn’t believe in their gods but merely used religion to control the masses.

Using that interpretation as a counterfactual lens, Champion argues instead that Roman elites sincerely tried to maintain Rome’s good fortune through a pax deorum or “peace of the gods.” The result offers rich new insights into the role of religion in elite Roman life.