Tuscany in the Age of Empire 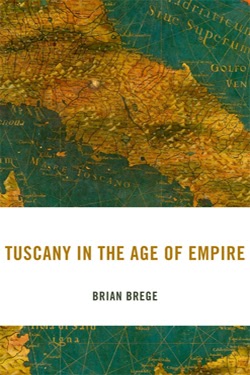 The Grand Duchy of Tuscany was not an imperial power, but it did harbor global ambitions. After abortive attempts at overseas colonization and direct commercial expansion, as Brian Brege, assistant professor of history, shows, Tuscany followed a different path, one that allowed it to participate in Europe’s new age of empire without establishing an empire of its own.

The first history of its kind, "Tuscany in the Age of Empire" offers a fresh appraisal of one of the foremost cities of the Italian Renaissance, as it sought knowledge, fortune, and power throughout Asia, the Americas, and beyond. How did Tuscany, which could not compete directly with the growing empires of other European states, establish a global presence?

First, Brege shows, Tuscany partnered with larger European powers. The duchy sought to obtain trade rights within their empires and even manage portions of other states’ overseas territories. Second, Tuscans invested in cultural, intellectual, and commercial institutions at home, which attracted the knowledge and wealth generated by Europe’s imperial expansions. Finally, Tuscans built effective coalitions with other regional powers in the Mediterranean and the Islamic world, which secured the duchy’s access to global products and empowered the Tuscan monarchy in foreign affairs.

These strategies allowed Tuscany to punch well above its weight in a world where power was equated with the sort of imperial possessions it lacked. By finding areas of common interest with stronger neighbors and forming alliances with other marginal polities, a small state was able to protect its own security while carving out a space as a diplomatic and intellectual hub in a globalizing Europe.