Why Mars: NASA and the Politics of Space Exploration 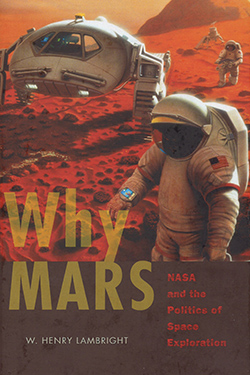 This book traces NASA’s torturous journey to Mars from the fly-bys of the 1960s to landing rovers and seeking life today. Mars has captured the human imagination for decades. Since NASA’s establishment in 1958, the space agency has looked to Mars as a compelling prize, the one place, beyond the Moon, where robotic and human exploration could converge. Remarkably successful with its roaming multi-billion-dollar robot, Curiosity, NASA’s Mars program represents one of the agency’s greatest achievements.

"Why Mars" analyzes the history of the robotic Mars exploration program from its origins to today. Professor W. Henry Lambright examines the politics and policies behind NASA's multi-decade quest, illuminating the roles of key individuals and institutions along with their triumphs and defeats.

Lambright outlines the ebbs and flows of policy evolution, focusing on critical points of change and factors that spurred strategic reorientation. He explains Mars exploration as a striking example of "big science" and describes the ways a powerful advocacy coalition—composed of NASA decision makers, the Jet Propulsion Laboratory, the Mars academic science community, and many others—has influenced governmental decisions on Mars exploration, making it, at times, a national priority.

The quest for Mars stretches over many years and involves billions of dollars. What does it take to mount and give coherence to a multi-mission, big science program? How do advocates and decision makers maintain goals and adapt their programs in the face of opposition and budgetary stringency? Where do they succeed in their strategies? Where do they fall short? Lambright’s insightful book suggests that from Mars exploration we can learn lessons that apply to other large-scale national endeavors in science and technology.