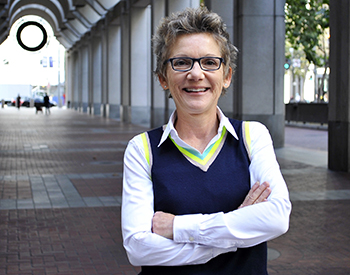 Surrounded by chaos at home in Ballwin, Missouri, Daly didn’t envision a bright future. That is, until she met the first of many people who would serve as what she calls the rungs on her personal ladder. Each rung believed in Daly and helped her reach new heights.

Betsy Bane encouraged her to earn her GED, and a mentor-mentee relationship quickly blossomed. As the two were discussing Daly’s path forward, Bane offered advice that still resonates.

“You have to bloom where you’re planted, and bloom every day. Wherever you start from, find a way to live your best life. You’ll have more opportunities and your world will be richer than you ever imagined. You’ll be successful and you’ll also be happy,” Daly says.

Four decades after receiving that advice—and after earning a GED, bachelor’s and master’s degrees, and a Ph.D. in economics from the Maxwell School of Citizenship and Public Affairs at Syracuse University—Daly is returning to the place she says launched her career as a respected economist.

Daly, the president and CEO of the Federal Reserve Bank of San Francisco, hopes to deliver a similarly inspiring Commencement address to the more than 7,000 Syracuse University graduates who will have their degrees conferred Sunday morning inside the Dome.

“These graduates are our future. I’m at this point in my career where I’m thinking about what these graduates are going to accomplish. If I can have even the smallest influence on how they think of themselves and how proud and hopeful we are of them, that’s the honor of being the Commencement speaker,” says Daly, who will be awarded an honorary degree.

Read the full story on the Syracuse University website.