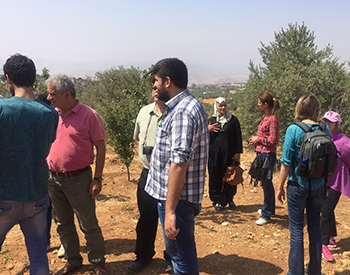 Catherine Gerard, director of the Program for the Advancement of Research on Conflict and Collaboration (PARCC), and Peter Castro, associate professor of anthropology, traveled to Amman, Jordan from August 7-10, 2017 to conduct a four-day workshop, with one of the days devoted to field training for staff members from the Near East Foundation offices in Jordan and Palestine. The workshop was funded by the Near East Foundation Olive Oil Without Borders III Project, the goal of which is to to promote reconciliation between Palestinians, Israelis, and Jordanians by strengthening cross-border economic cooperation and promoting mutual understanding among farmers, industry leaders, and Ministries of Agriculture in the olive sector. PARCC's role in the project is to provide orientation and training to Near East Foundation staff to build their capacity for using conflict management modules.

The focus of the training was to help staff communicate with farmers, mills owners, and olive oil traders. They learned skills including negotiation, facilitation, and problem-solving around the challenges and conflicts that they may face during the implementation of the Olive Oil Without Borders Project. The group met with farmers to apply the conflict analysis and have discussions with them to understand more about the challenges they faced during the olive oil production process; from the harvesting to the pressing and finally to the export process.