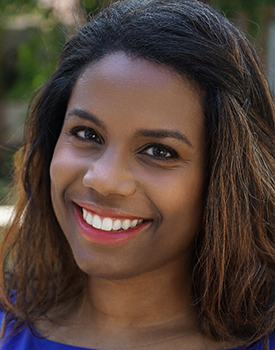 The native of Brooklyn landed the job in September 2019 after two years as a New York Excelsior Fellow, working for the state’s Office of Public Safety. “I found my niche,” Cordero said. “I absolutely adore my job. It is an honor every day to come into the office and work on the safety of all New Yorkers.”

The two-year Excelsior Service Fellowship Program begins in early September, when fellows are assigned to New York’s Executive Chamber, a government agency or authority. Exceptional fellows are invited to work for state agencies after the fellowship ends.

She later worked as a policy assistant at the Human Rights Campaign. There she assisted the organization’s advocacy in the landmark civil rights case Obergefell v. Hodges, in which a 2015 Supreme Court ruling established same-sex marriage throughout the United States and its territories.

“As a fellow in the Senate, I realized there was a series of skills I did not possess,” Cordero said, citing budgeting, and data and quantitative analysis. In Maxwell’s MPA program, “I learned to understand raw data and studied theories to better explain my ideas through a policy focus.”

Cordero also earned a master of arts in international relations and a certificate in national security at Maxwell.

New York’s Office of Public Safety oversees programs including the state police, homeland security and criminal justice services. “They all have a direct role in ensuring the safety of New Yorkers,” Cordero said. “These are issues I had always been interested in but only was exposed to at the federal level.”

Cordero’s proud to work for her home state. “I had never considered state service,” she said, “It turned out I really like it.”