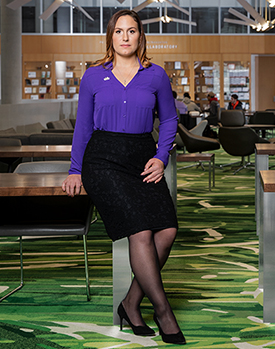 Syracuse University graduate student Katy Quartaro ’18 has always loved a challenge. When her older brother joined the Navy in 2006, Quartaro was still in high school in Rochester, but felt she was destined to serve in the armed forces. “I wanted to one-up my brother,” she jokes, but her decision wasn’t just sibling rivalry. “I wanted to be more than just a good student,” she recalls, “I wanted to be a part of something bigger than I was.”

Quartaro joined the Marine Corps in 2008 and took part in Operation Enduring Freedom-Philippines, but never deployed to Afghanistan as she had hoped. “My goal was to make the world a better, safer place,” she says, and supporting counterterrorism efforts seemed like the best route to that. Along the way, she discovered a different path to understanding the psychology that leads to extremism and terrorism.

While stationed in Japan, Hawaii and the Philippines, Quartaro took online psychology classes. “I wanted to know why criminals behave the way they do,” she says. After leaving the military, Quartaro hoped to continue her education and found that Syracuse University’s integrated major in forensic science and psychology was just what she wanted. “I was able to transfer my psychology credits and complete the degree in four semesters,” she says.

Quartaro graduated in December with a B.S. in forensic science and a B.S. in psychology and is now enrolled in the executive master of public administration program in the Maxwell School of Citizenship and Public Affairs. “Ultimately, I want to work for the government in counterterrorism or intelligence, so a good foundation in public leadership is important,” she asserts. She serves as an executive intern for the Office of Veteran and Military Affairs (OVMA) and as a team leader for Peer Advisors for Veteran Education (PAVE).

Read the full story via the Syracuse University website.