Delta Democracy: Pathways to Incremental Civic Revolution in Egypt and Beyond 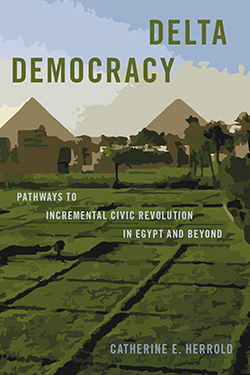 The 2011 Arab Spring protests seemed to mark a turning point in Middle East politics, away from authoritarianism and toward democracy. Within a few years, however, most observers saw the protests as a failure given the outbreak of civil wars and re-emergence of authoritarian strongmen in countries like Egypt. But in "Delta Democracy," Catherine E. Herrold argues that we should not overlook the ongoing mobilization taking place in grassroots civil society.

Drawing upon ethnographic research on Egypt's nongovernmental organizations (NGOs) in the wake of the uprisings, Herrold uncovers the strategies that local NGOs used to build a more democratic and just society. Departing from U.S.-based democracy advocates' attempts to reform national political institutions, local Egyptian organizations worked with communities to build a culture of democracy through public discussion, debate, and collective action. At present, these forms of participatory democracy are more attainable than establishing fair elections or parliaments, and they are helping Egyptians regain a sense of freedom that they have been denied as the long-time subjects of a dictator.

"Delta Democracy" advances our understanding of how civil society organizations maneuver under state repression in order to combat authoritarianism. It also offers a concrete set of recommendations on how US policymakers can restructure foreign aid to better help local community organizations fighting to expand democracy.