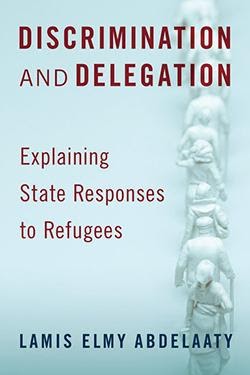 In her new book “Discrimination and Delegation: Explaining State Responses to Refugees”(Oxford University Press), Syracuse political science professor Lamis Abdelaaty examines the factors that shape states’ responses to refugees. She asks important questions about why some states welcome refugees while others exclude them, and why some states cede control of the asylum process and refugee camps to the United Nations.

These outcomes are enormously consequential for refugees, who might be protected or barred outright from entry into a state’s territory. Refugees might be admitted and afforded opportunities to seek employment, access healthcare and pursue education; or they might be barred, detained and denied the opportunity to lead a safe and dignified life.

Abdelaaty argues that policymakers in refugee-receiving countries welcome refugees who are ethnic kin fleeing rival states and shun refugees who are ethnic others fleeing friendly states. When a policymaker faces conflicting incentives, they will outsource refugee affairs and thereby “shift the blame” to the United Nations. Using a diverse array of methods including global statistics, interviews and archival research about Egypt and Turkey, and content analysis of Kenyan parliament proceedings, Abdelaaty reveals the complex dimensions of refugee policy as it relates to state sovereignty and human rights.

Lamis Abdelaaty is an assistant professor of political science at the Maxwell School of Citizenship and Public Affairs. Her research interests include international relations, migration and human rights. Abdelaaty has earned several external and internal awards, grants and fellowships, including from the National Science Foundation and the American Philosophical Society.

What explains the variety of responses that states adopt toward different refugee groups? Refugees might be granted protection or turned away; they might be permitted to live where they wish and earn an income, pursue education, and access medical treatment; or, they might be confined to a camp and forced to rely on aid while being denied basic services. However, states do not consistently wield their capacity for control, nor do they jealously guard their authority to regulate.

In this book, Lamis Abdelaaty, assistant professor of political science, asks why states sometimes assert their sovereignty vis-à-vis refugee rights and at other times seemingly cede it by delegating refugee oversight to the United Nations. To explain this selective exercise of sovereignty, Abdelaaty develops a two-part theoretical framework in which policymakers in refugee-receiving countries weigh international and domestic concerns. Policymakers in a receiving country might decide to offer protection to refugees from a rival country in order to undermine the sending country's stability, saddle it with reputation costs, and even engage in guerilla-style cross-border attacks.

At the domestic level, policymakers consider political competition among ethnic groups--welcoming refugees who are ethnic kin of citizens can satisfy domestic constituencies, expand the base of support for the government, and encourage mobilization along ethnic lines. When these international and domestic incentives conflict, the state shifts responsibility for refugees to the U.N., which allows policymakers to placate both refugee-sending countries and domestic constituencies.

Abdelaaty analyzes asylum admissions worldwide, and then examines three case studies in-depth: Egypt (a country that is broadly representative of most refugee recipients), Turkey (an outlier that has limited the geographic application of the Refugee Convention), and Kenya (home to one of the largest refugee populations in the world). Discrimination and Delegation argues that foreign policy and ethnic identity, more so than resources, humanitarianism, or labor skills, shape reactions to refugees.

Attitudes About Refugees and Immigrants Arriving in the United States: A Conjoint Experiment