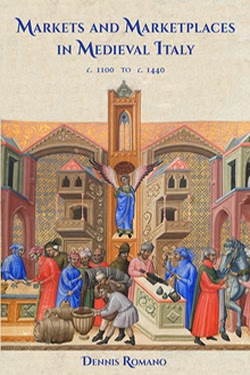 Cathedrals and civic palaces stand to this day as symbols of the dynamism and creativity of the city-states that flourished in Italy during the Middle Ages. "Markets and Marketplaces in Medieval Italy" argues that the bustling yet impermanent sites of markets played an equally significant role, not only in the economic life of the Italian communes, but in their political, social, and cultural life as well.

Drawing on a range of evidence from cities and towns across northern and central Italy, Dennis Romano, professor emeritus of history, explores the significance of the marketplace as the symbolic embodiment of the common good; its regulation and organization; the ethics of economic exchange; and how governments and guilds sought to promote market values. With a special focus on the spatial, architectural, and artistic elements of the marketplace, Romano adds new dimensions to our understanding of the evolution of the market economy and the origins of commercial capitalism and Renaissance individualism.