War and Slavery in Sudan 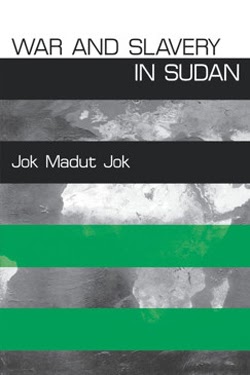 Slavery has been endemic in Sudan for thousands of years. Today the Sudanese slave trade persists as a complex network of buyers, sellers, and middlemen that operates most actively when times are favorable to the practice.

As Jok Madut Jok, professor of anthropology, argues, the present day is one such time, as the Sudanese civil war that resumed in 1983 rages on between the Arab north and the black south. Permitted and even encouraged by the Arab-dominated Khartoum government, the state military has captured countless women and children from the south and sold them into slavery in the north to become concubines, domestic servants, farm laborers, or even soldiers trained to fight against their own people. Also instigated by the Khartoum government, Arab herding groups routinely take and sell the Nilotic peoples of Dinka and Nuer.

Jok emphasizes that the contemporary practice of slavery in Sudan is not the result of two decades of civil war, as conventional wisdom in the media would have one believe. Instead he revisits the historic hostilities between the Islamic world to the north and, to the south, the Black African peoples, many of whom are Christian converts. For Arab traders "the nation of the blacks," or Bilad Al-Sudan, has traditionally been the source of slaves. When the slave trade developed into corporate enterprise in the nineteenth century, the slave-takers articulated distinctions based on race, ethnicity, and religion that marked the black, infidel southerners as indisputably inferior and therefore "natural" slaves.

Such distinctions have survived for decades and have fueled various forms of oppression of the black south, even during those periods when slavery has not been authorized by the government. When it is authorized, as it is today, slavery then becomes the extreme form of this systemic oppression. "War and Slavery in Sudan" exposes the enslavement of black peoples in Sudan which has been exacerbated, if not caused, by the circumstance of war.

As a black southerner and a member of the Dinka, a group targeted by Arab slave traders, Jok brings an insider's perspective to this highly volatile subject matter. He describes the various methods of capture, explores the heinous experience of captivity, and examines the efforts of slaves to escape. Jok also assesses the efforts of Dinka communities to locate and redeem, or buy back, slaves through middlemen, a strategy that has been supported by Western antislavery groups and church-based humanitarian agencies but has also been the subject of great moral debate.

Throughout the book, Jok stresses that the search for settlement of the north-south conflict must be made in conjunction with a campaign to end slavery. He challenges the international community to move beyond diplomatic measures to take more coordinated action against the slave trade and bring liberation to the people of Sudan.