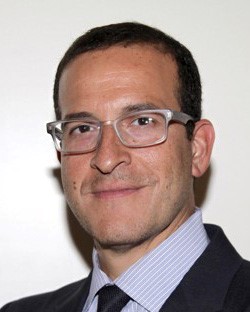 Doug Davis ’94 BA (PSc) has won a Grammy Award for his role in the making of the Brian Lynch Big Band album, “Omni-American Book Club,” which won in the Best Large Jazz Ensemble Album category.

Davis, who founded the entertainment law firm The Davis Group, worked as a producer on “Omni-American Book Club.” The album featured a blend of Afro-Caribbean jazz, swing, hip hop, funk, bossa nova, and trap that presents the work of authors including W.E.B. DuBois, Ta-Nehisi Coates, Naomi Klein, and Chinua Achebe, among many others.

This is Davis’s second Grammy; he previously won the award as a producer on the album “American Dreamers.” He has been featured in the Wall Street Journal, New York Times, New Yorker, and the New York Post, and in 2018 was named Variety’s Lawyer of the Year. Davis also served as executive producer of an Aretha Franklin memorial concert and television special, “Aretha! A Grammy Celebration for the Queen of Soul.”

In addition to his industry work, Davis is a board member of the Music for Youth Foundation, the Clive Davis Institute of Recorded Music at New York University, and the FC Cancer Foundation. He is also an executive committee member of the City of Hope National Medical Center, the Entertainment Committee for the MMRF Gala, and the Entertainment and Media Committee of United Jewish Appeal.

You can read more about “The Omni-American Book Club” in this news article.