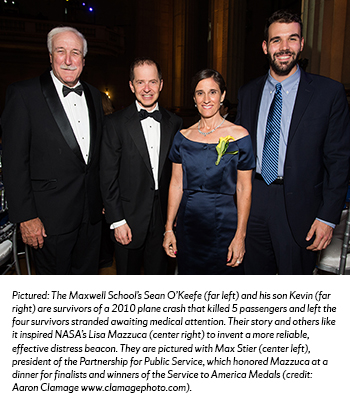 Each year, the Partnership for Public Service hosts a black-tie gala honoring federal employees for their outstanding achievements and their commitment to public service. At the event, a select group of honorees are additionally awarded Samuel J. Heyman Service to America Medals, known affectionately as the Sammies.

Maxwell alumna Emily Simonson ’15 MPA/IR was part of the winning Urban Waters team led by director Surabhi Shah, which created public-private partnerships to clean and revive urban waterways and their surrounding lands.  For their efforts, the team received the People’s Choice Award.

This year’s gala was also the setting for a reunion of sorts between Sammie finalist Lisa Mazzuca, mission manager for NASA search and rescue, and Partnership board member Sean O’Keefe, former NASA administrator. O’Keefe and his son Kevin are the survivors of a plane crash that killed five passengers including Sen. Ted Stevens. That fatal event, as well as the disappearance of Malaysia flight 370 and others, inspired Mazzuca and her team to design a sturdier, more reliable distress beacon that can help rescue teams detect and reach survivors faster. For this work, she was a finalist for a Promising Innovations Medal.

According to O’Keefe, who is now University Professor at Syracuse University’s Maxwell School of Citizenship and Public Affairs, “This is a huge development. It’s going to help people out in the most distressing circumstances and will have an enormous impact on scores of people who may not otherwise have had a chance to see another day.”