Voices at the Table

“Who here likes bureaucracy?” asks Tina Nabatchi. “I love bureaucracy. Here at Maxwell, I like to say we put the ‘rock’ back in bureaucracy.” She proceeds to list the many ways bureaucracy — that is, the day-to-day implementation of public policy — had already impacted her morning. Her coffee, for example, depended on trade agreements by which someone imported the Costa Rican beans, food-safety laws guiding their processing and delivery, and regulated energy that powers her coffee pot.

This is essentially the same pitch that Nabatchi, a public administration professor at Maxwell, delivers every summer to new MPA students. But today she’s speaking to 80 undergraduates from more than a dozen colleges and universities across New York state — members of Latino, African American, Asian, and other communities typically underrepresented in the world of public policy.

The students were attending the inaugural Maxwell School Policy Camp, a one-day conference hosted with the Association for Public Policy Analysis and Management (APPAM). It was designed to provide students of color with exposure to the field of public policy, with the hope of encouraging them to explore graduate schools of public policy and public affairs.

In a divisive era, experts often trace policy controversy to a lack of diversity within decision-making bodies. “There continues to be a lack of trained policy professionals of color in leadership positions in the public policy community,” says Robert Bifulco, professor and chair of public administration and international affairs (PAIA) at Maxwell. “We must work collectively to address this problem, and we were proud to partner with APPAM on this initiative.” (Maxwell was one of only two schools invited by APPAM to host a policy camp this year.)

Colleen Heflin, another PAIA professor who participated in the camp, says she “jumped at the opportunity” to address the pipeline problem. “The public affairs field is very white, as is the American political structure,” she says.

“There continues to be a lack of trained policy professionals of color in leadership positions in the public policy community.”

The conference — “Moving Beyond Activism to Good Public Policy: Having a Voice at the Table” — focused on the impact of diversity and advocacy on policy decision making. Attendee Karilyn Nieves, a junior history major from SUNY Geneseo — who admits she’d never even heard of an MPA before attending — gave the program high marks for illustrating how social activism can be turned into policy. Twice during the day students sat with faculty or alumni in small groups focused on a policy topic. Nieves says she particularly enjoyed her breakout on fair housing with economist John Yinger. “That is an area I would be interested in going into,” she says. Yinger referenced the book The Color of Law, which Nieves had read.

Nieves also valued interaction with other students of color who live and work at schools like her own. “It was nice to get a different perspective of their experiences in predominantly white institutions,” she adds.

The keynote was given by Lloyd Blanchard ’94 MPA/’99 PhD (PA), whose career path has passed through government, nonprofit, and academic sectors. Today he is an associate vice president at the University of Connecticut.

“Most young people want to change the world,” says Blanchard. “A career in public service brings their life story to the table, adding diversity to policy considerations. They then help others do the same.”

Blanchard was one of eight alumni of color who participated in the conference, on the career panel or as breakout leaders. Parag Mehta ’00 MPA, the executive director of the Mastercard Center for Inclusive Growth, told students that, growing up in an immigrant community, he only knew careers for doctors, lawyers, engineers, and businessmen. “I was fortunate that, in college, I was exposed to the power of policymaking to transform lives for the better,” he says. He participated in the Policy Camp to pay that forward. “When we open the door of possibility, we change the trajectory of history,” he adds. “The Policy Camp was a great way to catalyze a bit of that change.”

According to attendee Eric Jones, a sophomore English major at Monroe Community College, the alumni messages hit a chord. “All of the alumni shared remarkably insightful information into their academic experience at Syracuse and how it’s shaped their lives,” he says. “They really inspired me, in terms of what I could do within the community and running a nonprofit.”

Maxwell plans to repeat the event. “We received tremendous feedback from everyone who participated — students, faculty, and alumni,” says Christine Omolino, director of admission and financial aid in PAIA. “This was a valuable experience to potentially improve diversity in the field.”

Heflin, who led a topical breakout on support programs for low-income and disadvantaged families, is hopeful about what the student participants will bring to the public affairs arena in the future. “Students brought a unique set of insights to the discussion,” she says. “It was clear to me that these students could bring a new set of ideas to policy discussions.”

This article appeared in the winter 2019 print edition of Maxwell Perspective © Maxwell School of Syracuse University. 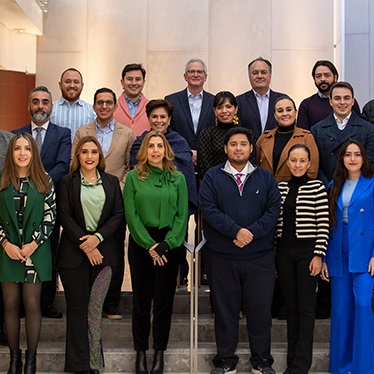