The Code of Putinism 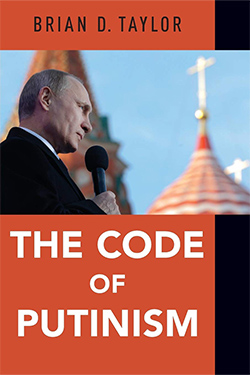 "The World Cup is more important to Putin than you think," says Brian D. Taylor, professor and chair of political science in the Maxwell School and the College of Arts and Sciences (A&S). "A lot has happened to Russia since 2010, when Putin won the bid to host the tournament—his re-election, the annexation of Crimea, Russian’s intervention in the Syrian war. The games come at a time when Russia’s standing in the world is precariously low."

Taylor speaks with authority. A scholar of Russian and comparative politics, he is the author of The Code of Putinism (Oxford University Press, 2018), a new book about how Putin’s mentality shapes his country’s politics. As Russia teeters on the brink of economic stagnation and international ostracism, Taylor argues that mega events, such as the World Cup and the Winter Olympics in Sochi, four years earlier, have strong political ramifications. "Merely hosting the World Cup is a major coup. It shows Russia still matters," he says.

Most of Taylor’s career has been a warm-up for The Code of Putinism, which he began researching five years ago. Drawing on hundreds of interviews and speeches, Taylor thinks Putin’s messianic vision could be Russia’s undoing.

Speaking by phone from his office in Eggers Hall, the bespectacled, clean-cut author riffs on how the code motivates Putin’s decisions and influences the way he and his allies view the world. "The code of Putinism has molded Russia’s political system, along with its economy and foreign policy, since Putin’s election as president in 2000," says Taylor, who also authored State Building in Putin's Russia: Policing and Coercion After Communism (2011) and Politics and the Russian Army: Civil-Military Relations, 1689-2000 (2003), both from Cambridge University Press. "Key factors of Russian politics—authoritarianism, Putin’s reliance on a small group of friends and associates, state domination of the economy, an assertive foreign policy—owe their existence to the code."

What is Vladimir Putin up to? This book shows how the mentality of Putin and his team - the code of Putinism - has shaped Russian politics over the past two decades. It explains not only the thoughts and ideas that motivate Putin's decisions, but also the set of emotions and habits that influence how Putin and his close allies view the world.The code of Putinism has powerfully shaped the nature of Russia's political system, its economy, and its foreign policy.

Brian Taylor, professor of political science, draws on a large number of interviews, the speeches of Putin and other top officials, and the Russian media to analyze the mentality of Team Putin. Key features of Russian politics today -- such as authoritarianism, Putin's reliance on a small group of loyal friends and associates, state domination of the economy, and an assertive foreign policy - are traced to the code of Putinism.

Key ideas of the code include conservatism, anti-Americanism, and the importance of a state that is powerful both at home and abroad. Dominant habits of Putin and his associates include control, order, and loyalty. Important feelings driving Russia's rulers include the need for respect, resentment about lost status and mistreatment by the West, and vulnerability.

While some observers portray Putin as either a cold-blooded pragmatist or a strident Russian nationalist, Taylor provides a more nuanced and compelling interpretation of Putin's motives and actions. "The Code of Putinism" also shows how Putin's choices, guided by this mentality, have led to a Russia that is misruled at home and punching above its weight abroad.