A campaign intended to raise as much as $1 million in new scholarship funds was launched earlier this semester in the name of legendary policy studies founder and professor Bill Coplin. The fund will support students in the policy studies major, of which Coplin is chief architect and lead teacher. 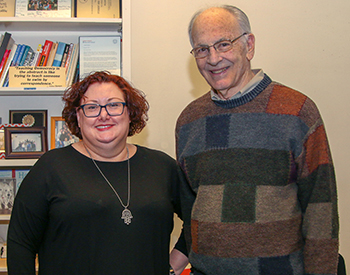 Creation of the Bill Coplin Policy Studies Scholarship was prompted by alumna Elysa B. Wolfe, a 1993 Maxwell graduate who herself majored in policy studies (as well as political science). Wolfe and her father, Ralph G. Wolfe, recently committed a major bequest gift to the Maxwell School in honor of Coplin. To honor the Wolfes and the intention of their eventual bequest, the University immediately initiated a campaign for a Coplin fund, so that other policy studies graduates may contribute.

Elysa Wolfe is an attorney in New York City who remembers vividly her initial contact with Coplin and the policy studies major. As a Syracuse freshman, she’d grown unhappy with her initial program of study and began searching for a new major. By chance, the resident advisor in her dormitory was a policy studies major and Coplin devotee, and suggested Wolfe sample the program.

“Instantly I knew,” Wolfe remembers. “It just clicked! I enjoyed the coursework’s pragmatism and emphasis on results. What do you see that’s wrong, and how do you effect change? What I especially appreciated was how the program encouraged me to get out into the community, roll up my sleeves, and make a difference.” During her undergraduate career, Wolfe joined other community-oriented organizations on campus and participated in countless acts of volunteerism and service — a tradition she carries on today as an organizer and volunteer in her home community.

“What I especially appreciated was how the program encouraged me to get out into the community, roll up my sleeves, and make a difference.”

Over time, she says, Wolfe has met dozens of fellow alumni who share an appreciation of Coplin and the distinctive undergraduate program with which he is strongly identified. She anticipates that many alumni will step forward to support the new fund. This is a way, she says, to “help ensure that the clan of policy studies alumni—and Bill Coplin disciples—continues to grow.”

Bill Coplin has been director of the undergraduate Public Affairs Program at the Maxwell School, where policy studies is hosted, since 1976. He has published more than 110 books and articles in the fields of international relations, public policy, political risk analysis, social science education, citizenship, and community service; and has written extensively on the need to reform both high school and college education to better meet the needs of students who see education as a path to better employment opportunities. He has consulted with more than 40 high schools throughout New York State on curriculum. His course Public Affairs 101: Introduction to the Analysis of Public Policy has been taken by more than 6,000 students at Syracuse University and by more than 10,000 high school seniors at 65 high schools through Syracuse University’s Project Advance Program.

Coplin has received the Chancellor's Citation for Distinguished Service from Syracuse University (1993) and was among inaugural appointees to the Laura J. and L. Douglas Meredith Professorship for Teaching Excellence at Syracuse (1995)—among several other awards for excellence in teaching and advising. His chief accomplishment, however, is the policy studies major, created in 1978 with the goal of incorporating public service into the curriculum. According to client estimates, his students provide more than $100,000 of research services and more than $60,000 in direct services to the clients of nonprofit agencies each year.

To make a contribution, visit the Coplin Fund webpage.