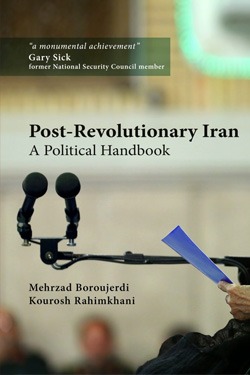 A new book co-authored by Maxwell School political scientist Mehrzad Boroujerdi offers an unprecedented range of data about and descriptions of the political landscape of Iran since the nation’s 1979 revolution.

Postrevolutionary Iran: A Political Handbook , recently published by Syracuse University Press, provides the most comprehensive collection of data now available on political life in postrevolutionary Iran. The book, co-authored by Binghamton University doctoral candidate Kourosh Rahimkhani, includes coverage of 36 national elections, more than 400 legal and outlawed political organizations, and family ties among the elite. The book provides biographical sketches of more than 2,300 political personalities, ranging from cabinet ministers and parliament deputies to clerical, judicial, and military leaders; much of this information was previously unavailable in English. The book’s systematic charting of Iran’s complex power structure serves the needs of policymakers, researchers, and scholars of the Middle East.

Boroujerdi, a professor of political science and O’Hanley Faculty Scholar at the Maxwell School, is a leading expert on Middle Eastern affairs. He oversees the Iran Data Portal, an online repository for social science data on post-revolutionary Iran — including, among other resources, translations of laws, regulations, and fatwas; governmental budgets; socio-economic data; and electoral data. Boroujerdi is the editor of Mirror for the Muslim Prince: Islam and the Theory of Statecraft (2013) and author of Iranian Intellectuals and the West: The Tormented Triumph of Nativism (1996) and I Carved, Worshiped and Shattered: Essays on Iranian Politics and Identity (2010), in addition to more than 30 journal articles and book chapters.

The author was recently interviewed by Jadaliyya (an independent ezine produced by the Arab Studies Institute) about Postrevolutionary Iran.