Global NATO and the Catastrophic Failure in Libya: Lessons for Africa in the Forging of African Unity 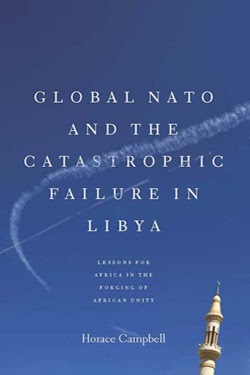 In this incisive account, scholar Horace Campbell, professor of political science and African American studies, investigates the political and economic crises of the early twenty-first century through the prism of NATO’s intervention in Libya. He traces the origins of the conflict, situates it in the broader context of the Arab Spring uprisings, and explains the expanded role of a post-Cold War NATO.

This military organization, he argues, is the instrument through which the capitalist class of North America and Europe seeks to impose its political will on the rest of the world, however warped by the increasingly outmoded neoliberal form of capitalism. The intervention in Libya—characterized by bombing campaigns, military information operations, third party countries, and private contractors—exemplifies this new model.

Campbell points out that while political elites in the West were quick to celebrate the intervention in Libya as a success, the NATO campaign caused many civilian deaths and destroyed the nation’s infrastructure. Furthermore, the instability it unleashed in the forms of militias and terrorist groups have only begun to be reckoned with, as the United States learned when its embassy was attacked and personnel, including the ambassador, were killed. Campbell’s lucid study is essential reading for anyone seeking to understand this complex and weighty course of events.

Murrett Piece on Achieving Peace in Ukraine Published in The Hill

Murrett Talks About the G7 and NATO Summits on 570 WSYR