He arrived on campus as a teaching assistant in 1950, joined the faculty two years later as an instructor and earned his doctorate in 1957 from the Maxwell School. A decade later, he was appointed chair of the Sociology Department, becoming the first Black man appointed to an academic administration position at the University. 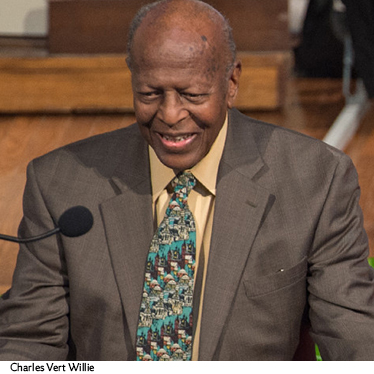 The legacy of Syracuse University alumnus Charles Vert Willie G’57, H’92 will forever be tied to that of his friend Martin Luther King Jr., making Willie’s passing a week before MLK Day 2022 especially poignant. Willie, who died on Jan. 11 at the age of 94, will be remembered in his own right as a champion for inclusion, equity and social justice.

Twenty years ago, Willie delivered some often-quoted remarks on the occasion of MLK Day 2002 at Harvard University: “By idolizing those whom we honor, we fail to realize that we could go and do likewise. As I have said on many occasions, honoring Martin Luther King Jr. would be dishonorable if we remember the man and forget his mission. For those among us who believe in him, his work now must become our own.”

Willie, indeed, made the work of King his own, as a student, teacher and administrator at Syracuse University for nearly 25 years. He arrived on campus as a teaching assistant in 1950, joined the faculty two years later as an instructor and earned his doctorate in 1957 from the Maxwell School of Citizenship and Public Affairs. A decade later, he was appointed chair of the Sociology Department, becoming the first Black man appointed to an academic administration position at the University. He was also named vice president for student affairs in 1972.

Willie once described Syracuse University as a place “where I made thousands of friends and learned hundreds of lessons about reform and rebellion, redemption and reconciliation.” He engaged with students during campus protests, always seeking justice through understanding and mutual respect.

Willie brought to academia and administrative work a perspective grounded in history and personal experience as a child of segregation. He detailed what that meant to him in an interview in 1989 for the Concord, Massachusetts, Oral History Project, recalling his boyhood in Dallas, Texas: “I also grew up during the period when blacks had to sit at the back of the bus and at the back of the streetcar. It was always humiliating to me to pay one’s fare and then have to push through a crowded streetcar all the way to the back of it, but these were the experiences that one grew up with…. High office and prestige is no basis for knuckling under to injustice, and that’s been a tenet of my life over the years. So, wherever I find injustice, I am sorry, I have to oppose it.”

Chancellor Kent Syverud, who presented Willie with the 2017 Chancellor’s Citation Lifetime Achievement Award, noted his dedication to social justice. During the presentation, Chancellor Syverud said, “Through teaching, research and public service, Dr. Willie built a powerful legacy of advancing access and opportunity for all. Educator and social activist, he served as a court-appointed master, expert witness and consultant in many school desegregation cases. Throughout his career, he leveraged the power of social research to advance the cause of justice.” 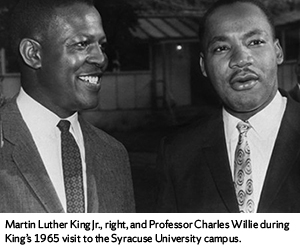 During his tenure at Syracuse University, Willie twice hosted his friend Martin Luther King Jr. on visits to campus, in 1961 and 1965. Willie and King had been classmates at Morehouse College, where Willie earned a B.A. in 1948. Years later, Willie once again stood by King’s side when introducing him to a Syracuse audience: “We have great affection for you in this city,” Willie told his friend. “We honor you because you have visited us and because of your achievement and because of your suffering.”

In 1974, Willie left Syracuse to accept a tenured position as professor of education and urban studies at Harvard University’s Graduate School of Education. His areas of research included desegregation, higher education, public health, race relations, urban community problems and family life. He published more than 100 articles and 35 books. Even after formally retiring from Harvard in 1999, Willie continued to teach part-time for another decade. 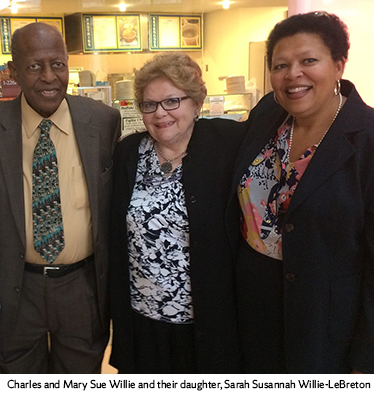 In 1992, Willie was awarded an honorary degree by Syracuse University. And, in 2000, he received the George Arents Pioneer Medal, Syracuse University’s highest alumni honor, presented to alumni who have made outstanding contributions to their chosen fields.

His obituary is a tribute to his life and legacy: “He strove to bring the ideals of justice, equity, empathy, and reconciliation to every conflict he faced. He uncovered the best in everyone, understanding that no matter how intransigent the conflict, resolution required neither the annihilation nor the humiliation of opposing sides. Following those principles allowed Willie to build strong professional and personal bonds; he leaves behind a broad and diverse community of those who were touched by his grace.”